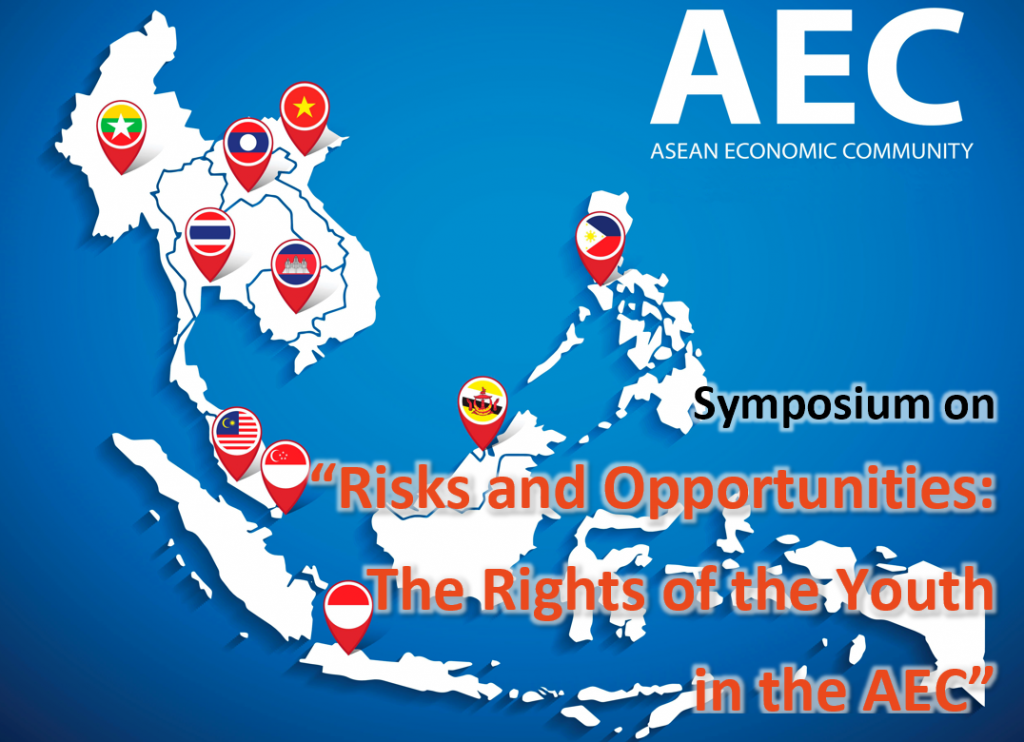 The Human Rights Resource Centre (HRRC) and the University of Cambodia (UC) will be hosting a symposium on the theme “Risks and Opportunities: The Rights of the Youth in the AEC” in the afternoon of 9 December 2016 at the UC Conference Center, UC Main Campus in Phnom Penh, Cambodia.

It is envisioned that the symposium would disseminate knowledge on ASEAN policies, particularly those found in the ASEAN Economic Community (AEC) Blueprint 2025, to local stakeholders, including youth from different universities in Cambodia. It would seek to highlight the AEC’s impact, both positive and adverse, specifically on the rights of Cambodian youth, including the potential influence to their right to work and risks of non-traditional security threats such as human trafficking.

The ASEAN Community was officially launched at the end of 2015. As the AEC aims to transform ASEAN into a region with freer flow of goods, skilled labour and capital, the potential risks­—especially to vulnerable and marginalized populations—should be considered to ensure that all sectors of the population benefit from economic progress. Although most people have heard the term “ASEAN,” many do not have a clear understanding of what ASEAN does, nor its possible impacts on their lives.

The symposium will provide Cambodian youth with the opportunity to discuss with experts and peers the implications of regional developments and how they can benefit from them while avoiding the common pitfalls of rapid economic integration or development. In addition, it will also stimulate awareness of regional integration to form the foundation for them to later, as leaders, continue the endeavour to shape the region into a community characterised by shared prosperity. Generating more awareness among the youth and building their capacity would allow them to maximize the opportunities in the AEC as well as for the ASEAN Community to realize its full potential.

All are invited to attend. Please email Mr. Travis Mitchell at director_crc@uc.edu, cc: o.christina@hrrca.org, by 5 December to register.