Jakarta, 14 September 2016—Organisers of the 2016 Summer Institute in International Humanitarian Law and Human Rights have issued a Meeting Report highlighting key discussion points from the proceedings, including views from participants on the “way forward” in regards advancing human rights in the ASEAN Economic Community. The Summer Institute was held around the theme “Examining the Rights Impact of the ASEAN Economic Community” and was conducted from the 10th to the 12th of August 2016 in Bali, Indonesia. The Summer Institute this year was proudly hosted by the HRRC with the WSD HANDA Center for Human Rights and International Justice, the East West Center, and Udayana University.  It was made possible with the generous support of the U.S. Government, the Ministry of Foreign Affairs Singapore, and private donors.

As the Meeting Report notes, the Summer Institute 2016 brought together representatives of ASEAN bodies, such as AICHR, ACWC, ACMW, and the ASEAN Secretariat, together with delegates from government ministries, international non-government organizations, key experts, and members of the academe, and provided the participants with a platform to discuss the ASEAN Economic Community from the perspective of human rights, and more particularly, its impact towards vulnerable groups, such as women, youth, and migrant workers.  The participants were encouraged to openly exchange views in order to formulate a harmonized, coordinated regional approach to the prevention of and response to increased human rights risks brought about by economic integration.

During the workshop, the presenters and participants discussed the opportunities and benefits that come with regional integration, such as decrease in poverty and increase in employment opportunities, as well as the challenges to regional integration, such as the marginalization of some sectors, unequal distribution of benefits, gender-blindness of the AEC framework, non-traditional security issues, and increased human trafficking risks. The ASEAN bodies were encouraged to push for the greater inclusion of human rights in ASEAN policies and programs, and to strengthen the protection of vulnerable groups with the highest risks in AEC.

One main point highlighted by participants is the need for ASEAN bodies to have practical strategies to address issues.  The need to mainstream human rights in the AEC was raised during presentations and in the breakout sessions, which the participants could conduct through: (1) engagements with relevant regional and national government bodies, and engagements with other stakeholders in ASEAN such as civil society, the academe, and business groups; and (2) increase in cross-pillar and cross-sectoral cooperation between and across ASEAN pillars and sectors to guarantee the inclusion of human rights its action lines and programs and ensure that efforts between bodies are streamlined, coordinated and enhanced. 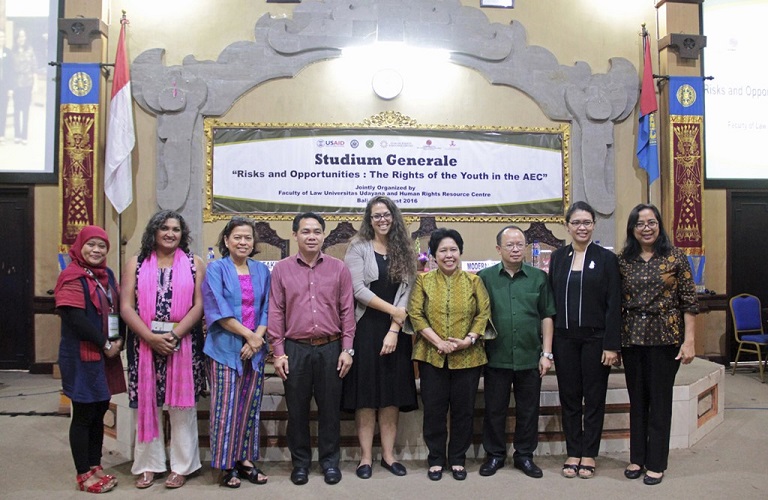 This year’s Summer Institute also saw the continuation of exchange with the youth with the Studium Generale at Udayana University, which gave local students greater awareness on the opportunities and risks of the AEC to them as citizens within ASEAN, and the opportunity to discuss the AEC with a panel of expert speakers and other delegates.