Jakarta, 30 September 2015—The Reporting and Assurance Frameworks Initiative (RAFI), an on-going collaboration of Shift, Mazars, and the HRRC, continued its multi-stakeholders consultation series with a meeting with CSOs on 28 September, and an expert consultation meeting on the 29th of September.

The UN Guiding Principles Reporting Framework, officially launched in February 2015, provides the first comprehensive guidance for companies to report on how they respect human rights in practice. The Framework includes input of various stakeholders who participated in consultations convened by the RAFI project team over the last two years.

The latest round of consultations, which were held at the Mazars office in Jakarta, discussed the next stages of the Reporting and Assurance Frameworks Initiative. Many of the participants had attended previous consultations, thus were aware of the process to develop the Reporting Framework.

Shift explained the salient features of the Reporting Framework, which was produced following consultations that took place in different parts of the world, including Southeast Asia. It is hoped that the Reporting Framework would assist corporations in preparing a comprehensive human rights report that considers corporate policies as well as the practical implications and implementation of such policy. Moreover, a better reporting standard could be used as a platform for constructive interaction between corporation, the government, CSOs, and other stakeholders. 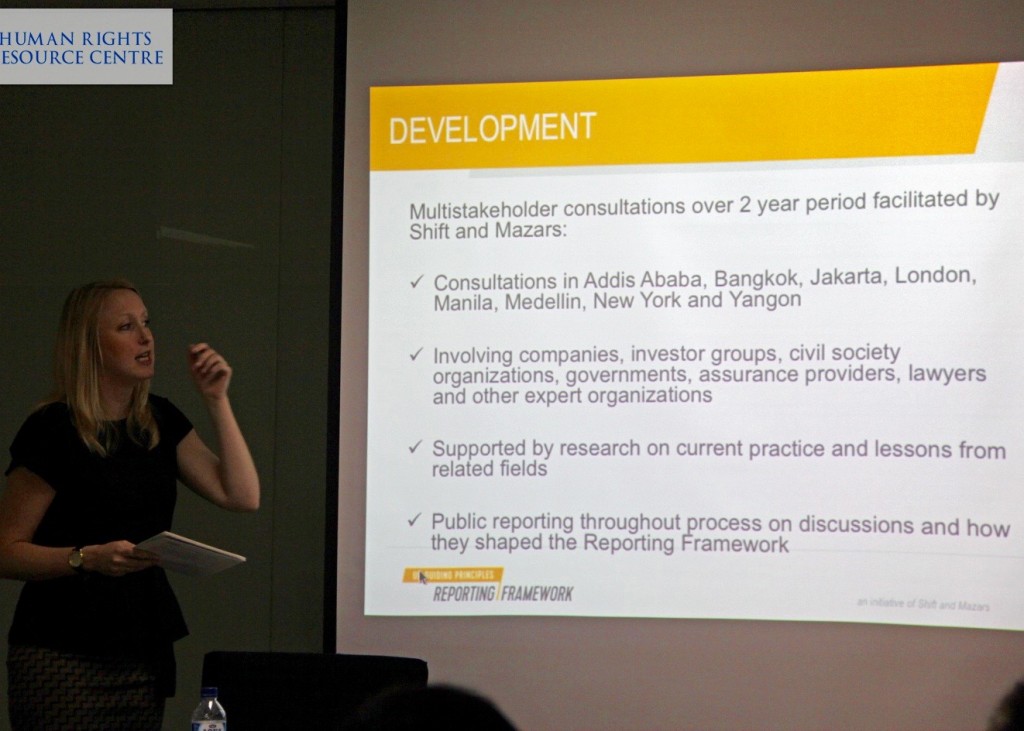 The meeting with civil society also discussed how the UNGP Reporting Framework could be useful for the work of CSOs, what specific measures can be done to raise awareness among companies, and how better human rights disclosure could be promoted. Participants emphasised the need to involve governments in endeavours to advance business and human rights, as they play a major role in getting corporations to comply with the law and international standards. In addition, attendees also recommended liaising with employer associations, guilds, and chambers of commerce. Incorporating the Reporting Framework in Indonesia’s Business and Human Rights National Action Plan and developments in the country after the 2014 election were also discussed.

Business and Human Rights is one of the HRRC’s core focuses. The Centre is proud to be part of this important initiative and hopes this endeavour would assist corporations in the region as well as contribute to the realisation of the UNGP, particularly in ASEAN.