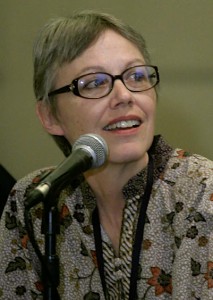 Sidney Jones is Director of Jakarta-based Institute for Policy Analysis of Conflict. From 2002 to 2013, Jones worked with the International Crisis Group, first as Southeast Asia project director, then from 2007 as senior adviser to the Asia program. Before joining Crisis Group, she worked for the Ford Foundation in Jakarta and New York (1977-84); Amnesty International in London as the Indonesia-Philippines-Pacific researcher (1985-88); and Human Rights Watch in New York as the Asia director (1989-2002).  She holds a B.A. and M.A. from the University of Pennsylvania. She received an honorary doctorate in 2006 from the New School in New York.

She is an expert on security in Southeast Asia, particularly Islamic terrorist movements in Indonesia. Jones has examined separatist conflicts (Aceh, Papua, Mindanao); communal conflicts (Poso, Moluccas); and ethnic conflict (Kalimantan). She also has studied Islamic radicalism, producing reports on Jemaah Islamiyah and its operations in Indonesia and the Philippines, as well as issues of security sector reform and decentralisation in Indonesia.

She is the author of Making Money Off Migrants: The Indonesian Exodus to Malaysia (2000) and has contributed to numerous media outlets, such as The New York Times, Financial Times,CNN, BBC, ABC, NBC, and The Jakarta Post.