Tokyo, 13 December 2015—The World Wide Support for Development (WSD) together with the Human Rights Resource Centre (HRRC) and WSD HANDA Center for Human Rights and International Justice at Stanford University (WSDHC) co-organized the first WSD Global Human Rights Summit in Japan, with a special focus on trafficking in persons. The event was held in two parts: an Experts Round Table attended by the Summit speakers and WSD members and a public seminar attended by 1,200 participants from Tokyo. Trafficking in persons (TIP) as a crime has been defined in the Palermo Protocol adopted by the UN General Assembly on 15 November 2000 as “the recruitment, transportation, transfer, harbouring or receipt of persons, by means of the threat or use of force or other forms of coercion, of abduction, of fraud, of deception, of the abuse of power or of a position of vulnerability or of the giving or receiving of payments or benefits to achieve the consent of a person having control over another person, for the purpose of exploitation.” At a minimum, exploitation includes the exploitation of the prostitution of others or other forms of sexual exploitation, forced labour or services, slavery or practices similar to slavery, servitude or the removal of organs.

Experts Round Table: TIP as a Global Problem Requiring Multi Level Solutions by All Actors

The Chairman of WSD, Dr. Haruhisa Handa, who facilitated both parts of the Summit, emphasized the importance of this event. While trafficking in persons (TIP) is an important challenge in this globalized world, he noted that there is not enough awareness about this problem, particularly among the public in Japan. Baroness Valerie Amos, the Director of SOAS, University of London, concurred, adding that every country is in fact impacted by TIP in one way or the other. Baroness Amos condemned the exploitation of fears and vulnerability and power inequality that is at the core of TIP. Preventing TIP, she emphasized, requires global, regional, and local efforts. Professor David Cohen, Director of WSDHC, agreed that combating TIP through criminal prosecution is a “low hanging fruit,” and efforts need to be exerted for TIP’s prevention. “Raising public awareness is important, especially in wealthier countries,” Professor Cohen asserted. He drew attention to the potential power of costumers in such places to curb consumption from sources that practice modern slavery. He also emphasized the need for valid data gathering, as it is important to measure the gravity of the problem and to check the effectiveness of the current efforts to fight TIP.

Focusing on the role of media, Kavi Chongkittavorn, member of HRRC Governing Board and a senior journalist in Southeast Asia, commented on what he perceived was the failure of the media to consistently bring forth news on TIP. There is a certain herd mentality in news reporting nowadays, Mr. Chongkittavorn asserted, where most media simply follow the “leaders” such as CNN. Thus, when these leaders decided Rohingya refugees were the main news, others followed. When their focus shifted to the Middle East, others simply stopped reporting on the refugee crisis in Southeast Asia. Mr. Chongkittavorn emphasized the need for consistency in human rights reporting as well as training journalists to accurately report human rights events.

Another issue addressed at the Experts Round Table is the rise of extremism, which exacerbates TIP globally. Mr. Karim Khan, member of Queen’s Counsel, called to attention the need to re-evaluate values that countries project. When a country projects or lets factions nurture values that promote inequality and reduce the worth and dignity of girls and minority groups, this increases their vulnerability to all forms of abuses, including TIP. Mr. Khan cautioned especially against the spread of Wahhabism, an extreme interpretation of Islam promoting gender inequality, intolerance, and draconian laws. Wahhabism is being promoted by Wahhabi countries through, amongst others, sponsorship for education institutions.

Business and human rights was also touched upon during the Experts Round Table, with Dr. Handa emphasizing the need to mobilize businesses to abide by human rights values as part of the effort to curb TIP from the demand side. Only when businesses act responsibly, he emphasized, will practices such as labour exploitation and modern day slavery be ever reduced. 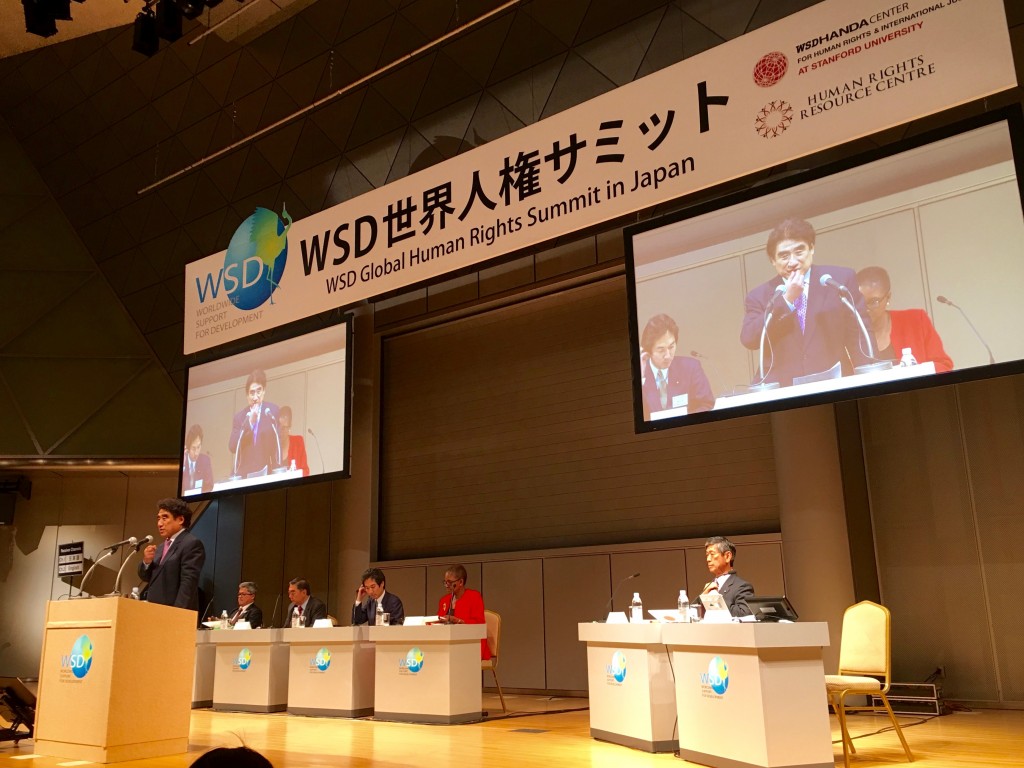 The public seminar comprised of two sessions, one dedicated to understanding TIP as a global issue and the other identifying global strategies to end human trafficking and slavery. The seminar opened with a keynote speech by H.E. Professor Dr. Surakiart Sathirathai, Former Deputy Prime Minister of Thailand and Chairman of the Asian Peace and Reconciliation Council. In his remarks, H.E. Sathirathai highlighted the complexity of TIP. “Sovereignty, border security actually play into the hands of traffickers,” he asserted, highlighting the need for international cooperation in combatting pervasive crimes. Cooperation should not only be limited to criminal prosecution, however, as “sticks will need carrot,” H.E. Sathirathai cautioned. To combat TIP, a country requires adequate development, education, health care, and a stable government. He also emphasized that to curb TIP, governments need to ensure human security, which he defined as “freedom from fear and freedom from want.” The lack of the above are the chief root causes of this global crime, H.E. Sathirathai concluded.

H.E. Minoru Kyuchi, former State Minister for Foreign of Affairs of Japan, also delivered a keynote speech during the first session. He lauded the organization of the event. He said that such measures are important to bring this issue to the attention of the Japanese public because, contrary to common belief, Japan is also impacted by TIP. In Japan, H.E. Kyuchi elaborated, TIP is mostly for labour and sexual exploitation. “Strengthening monitoring of companies with foreign workers is a must,” he emphasized. The former Minister pointed to the need for four P’s in combatting TIP, namely Protection, Prosecution, Prevention, and Partnership. Comprehensive measures are a must. In this regard, H.E. Kyuchi noted that Japan has already established a multi-ministerial anti-trafficking council to ensure that the effort to combat TIP will address all facets of the issue. He also mentioned Japan’s effort to enable other states in doing their part by providing development aid channelled through JAICA. Public awareness, an important element for the prevention of TIP, however remains an issue in Japan, he lamented.

Bringing the perspective of ASEAN, H.E. Ong Keng Yong, former Secretary General of ASEAN and HRRC’s Chairman of Governing Board outlined three major challenges in combatting TIP in the region: the lack of institutional capacity of, among others, the police, customs officers, coast guards, and military; movement of people and rampant illegal activities; and the lack of economic resources. He further underlined, “The real solution is at the root—we have to provide more jobs and encourage good economic development so people are not attracted by dangerous job opportunities.”

Rafendi Djamin, Indonesia’s representative to the ASEAN Inter-governmental Commission on Human Rights (AICHR) and HRRC’s Governing Board Member also outlined the limitation of ASEAN in tackling TIP, namely the absence of a supranational structure in the region that can coordinate measures to holistically manage the problem.

Picking up from H.E. Sathirathai’s point on the need for international cooperation beyond law enforcement, Baroness Amos underlined the need for developmental aid to source countries, such as Eritrea and Yemen. She also emphasized the need for a rights-based approach. “We need to reframe how we are collectively talking about the issue,” she cautioned, adding that the pervasive trend to blame the victims and demonize the most vulnerable has further exacerbated TIP globally.

During the second session Ms. Beth Van Schaack, WSDHC’s Senior Fellow, presented the US method in tackling TIP. Similar to Japan, the US aims to implement the four P’s against TIP, including rehabilitation and restitution for victims. The US also has a TIP line which has received over 100,000 tips since 2007 and has greatly aided rescue operations and prosecution.

Still focusing on the strategy to end TIP and slavery, H.E. David Carden, former US Ambassador to ASEAN and WSDHC’s Advisory Board Member, pointed to the government’s duty to provide for the people. Governments need to raise revenue for development, he commented, and this should be done by collecting sufficient taxes and managing the income responsibly and accountably. “We need to invest in people and keep them from being vulnerable,” he pressed.

Dato Syamala Alegendra, WSDHC’s Advisory Council Member and Defence Counsel at the International Criminal Court, also highlighted the need for international agencies and actors hoping to combat international crimes to act transparently and accountably. She elaborated on how UN and international aid agencies have in fact become part of the TIP problem, with some officers engaging in sexual exploitation when deployed to provide assistance in conflict and migration situations. As an example she cited a scandal that happened early this year, when French peace keepers in Central African Republic were found bribing hungry children to perform sexual acts. This, she asserted, was but the tip of the iceberg. She called for measures to be taken to stop this abominable practice.

With regard to what businesses and private citizens can do towards ending TIP, Ian Thorpe, Australian Olympic gold medallist, encouraged the audience to “be the change in a world that we want it to be.” Businesses and consumers have the opportunity to eradicate TIP by being more prudent in their pattern of consumption and scrutinizing the sources of merchandises they purchase. Consumers need to speak up, Mr. Thorpe stressed. “We each have responsibility to act in our community… If we are without a voice on this issue, so too will the victims.”

Echoing this sentiment, H.E. Ong encouraged businesses to look into the UN Guiding Principles on Human Rights and implement its framework. Consumers also need to check whether businesses they engage with abide by the principles, H.E. Ong suggested. “In this manner we as consumers can know what our companies are doing to protect workers and the human rights of people impacted by them.” Cognizant of the fact that governments cannot do everything, the former Secretary General of ASEAN also pushed for greater effort from civil society organizations and regional bodies to tackle the problem.

In his closing remark, Professor David Cohen, Director of WSDHC, said that in combatting TIP we cannot solely rely on the criminal justice model, especially because in some contexts the institutions are the perpetrators. “We need to recognize the responsibility is ours—it is not the responsibility of some abstract organizations,” he stressed. Thus, awareness is the key, and we can each take responsibility by making the issue more known and also thinking about whether or not our actions exacerbate or alleviate the problem.