Yogyakarta, 9 November 2015—In the first joint workshop hosted by the ASEAN Intergovernmental Commission on Human Rights (AICHR) and Senior Officials Meeting on Transnational Crime (SOMTC), discussions focused on ensuring a rights-based approach to combatting trafficking in persons, particularly women and children, in the region.

The ASEAN is making significant strides in addressing trafficking in the region. It has adopted documents, such as the ASEAN Declaration on Transnational Crime (1997), and established various bodies to tackle the problem. More recently, the SOMTC has been drafting the ASEAN Convention on Trafficking in Persons (ACTIP) and the ASEAN Plan of Action (APA) to Combat Human Trafficking. The ACTIP will serve as the legal framework for the ASEAN to effectively cooperate and enhance regional efforts in combating human trafficking, while the APA is the action-oriented instrument that will implement and operationalize the convention. It is expected that the draft ACTIP and APA will be adopted in November 2015.

The ASEAN Inter-governmental Commission on Human Rights (AICHR) is another key actor working to enhance the regional institutional framework on trafficking. It has maintained that regional policy discussions on trafficking should include a human rights dimension and gender perspective. In its Five Year Work Plan, the AICHR will be undertaking a regional thematic study on Trafficking in Persons Particularly Women and Children in ASEAN. The ASEAN Commission for the Promotion and Protection of the Rights of Women and Children (ACWC) and the ASEAN Committee on the Implementation of the Declaration on the Protection and Promotion of the Rights of Migrant Workers (ACMW) are also undertaking initiatives to enhance the regional response to trafficking.

Appreciating the many on-going programmes that aim to resolve the problem of trafficking, the workshop held from the 5th to the 6th of November in Yogyakarta was designed as a platform for the different ASEAN bodies to share their respective work and to consider developing a coordinated response to trafficking, which can enhance the implementation of the ACTIP, APA and other anti-trafficking initiatives in ASEAN. 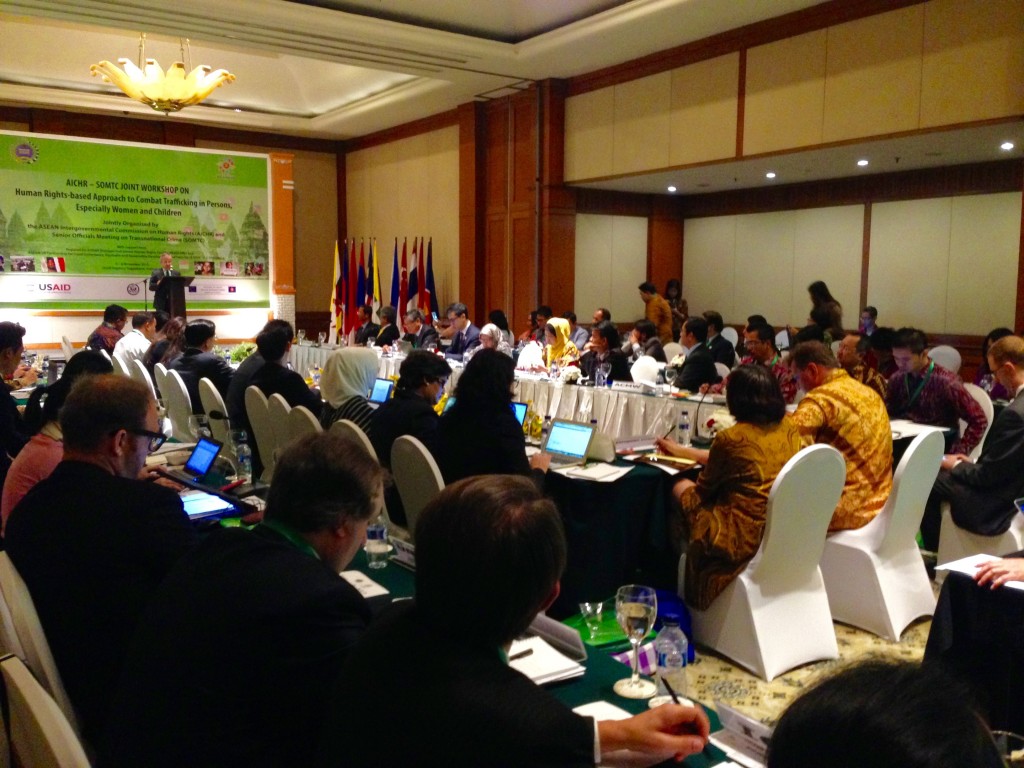 H.E. Sieng Lapresse, Chair of the SOMTC, set the tone for the two and half day event with a keynote address. He appealed to the delegates to look deeply into the affirmations in the ASEAN Human Rights Declaration, including the right to live in dignity, the right to work, and to free choice of employment. Expressing his personal conviction, he said, “I would like ASEAN Member States to clearly define sex industry and prostitution” so that law enforcement authorities are guided by precise provisions, “in order to protect the value of human dignity, freedom of choice for employment and freedom from arbitrary interference with his or her privacy, including personal data.”

Panel on mapping out regional initiatives and priorities, with representatives from SOMTC, AICHR, ACWC, and SOMSWD

In a session to map out regional initiatives and priorities, Mr. Mohammad Safei, SOMTC Focal Point of Indonesia, presented a brief note on the ACTIP, including its objectives, main components, and the key stakeholders for its implementation. Together with Mr. Safei in this panel were Mr. Rafendi Djamin, Representative of Indonesia to the AICHR, H.E. Datin Paduka Intan Md. Kassim, Chair of the ACWC, and H.E. Dato’ Sabariah Binti Hassan, Chair of the ASEAN Senior Officials Meeting on Social Welfare and Development (SOMSWD).

Other speakers during the event came from a broad range of actors in the region, including the United Nations Action for Cooperation against Trafficking in Persons (UN-ACT), International Organisation for Migration (IOM), South East  Asia National Human Rights Institutions Forum (SEANF), the ASEAN Coordinating Centre for Humanitarian Assistance on disaster management (AHA), and the ASEAN Secretariat. HRRC’s Research and Project Coordinator, Ms. Faith Delos Reyes, gave a presentation on preventing trafficking in persons in the context of migration within ASEAN, drawing from HRRC’s 2012 baseline study on women and children as well as several more recent publications, especially those by the ILO and IOM.