Manager and Treasurer of the Governing Board 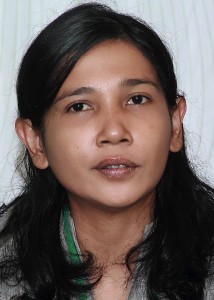 Ms. Aviva Nababan has a background as an educator, court monitor, researcher, as well as simultaneous interpreter for Bahasa Indonesia and English. She has a Bachelor’s degree in Education and a Master’s degree in International Relations.Presently she is pursuing her Masters in Theories and Practice of Human Rights in the Law Faculty of the University of Oslo, Norway.

Aviva has been involved in a number of projects related to transitional justice, rule of law and criminal justice reform. She has been involved with Asian International Justice Initiative (AIJI), a collaborative program on rule of law and human rights in Asia of the East West Center and the WSD Handa Center for Human Rights and International Justice at Stanford University (formerly the UC Berkeley War Crimes Study Center) in various capacities for more than a decade. This includes working as research assistant to the Advisor of the Indonesia-East Timor Truth and Friendship Commission, who is also the Director of AIJI. She also served as AIJI’s Head of Programs for Cambodia, in charge of, among others, the Khmer Rouge Tribunal (also known as the Extraordinary Chambers in the Courts of Cambodia) Monitoring Program. Prior to that, she was a Lead Monitor in the Khmer Rouge Tribunal Monitoring Team that monitored Case 001 before the Tribunal. Aviva also has managed a number projects collaborating with local partners in Indonesia, including Training for Law Enforcement in Conflict Areas, as well as Anti-Corruption Court Trial Monitoring.

Aviva has specific interests in research and programs related to transitional justice, administration of justice reform, and freedom of religion and belief. She also has a keen interest in developing human rights training materials for different audience using andragogy methods.