Manager and Secretary of the Governing Board 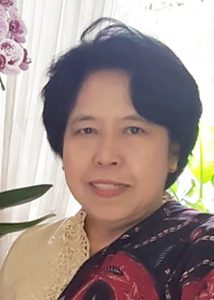 Harkristuti Harkrisnowo is a Professor at the Faculty of Law, University of Indonesia. She obtained her master’s and doctoral degrees from the Sam Houston State University.  Her main interests are criminal law, criminal justice, criminology and human rights, which are also subject matters of her classes. She was a visiting professor at the University of South Carolina and Beijing University. She contributed in various books, including Theory and Application of a Common World and Support for Victims of Crime in Asia (2007), as well as various journals. She established the Human Rights Study Center at the University of Indonesia in 1999, and introduced human rights as a mandatory subject at the law school.

Today she serves as the Acting Executive Director of the Human Rights Resource Centre, a Jakarta-based think-tank focusing on human rights issues in ASEAN. She is actively involved in many legal drafting processes and spearheaded the drafting of the Victim and Witness Protection Law and Juvenile Criminal Justice System Law, both incorporating international human rights standards and norms. Today she is in the Drafting Team of the Indonesian Criminal Code. In 1996 she was appointed as the Director General for Human Rights, then as Director General of Administrative Legal Affairs, and as head of the Human Resource Development Agency until 2016, all at the Ministry of Law and Human Rights.  She was a member and, in a number of occasions, the head of delegation of the Government of Indonesia to UN treaty bodies/mechanisms, such as the UPR, CEDAW, CRC, CAT and CERD.