Jakarta, 13 May 2015— The Human Rights Resource Centre, in collaboration with the Human Rights Center of the Law Faculty of the University of Indonesia (SENTRA HAM UI) and Abdurrahman Wahid Center at the University of Indonesia (AWC UI), today held a discussion on the findings of “Keeping the Faith: A Study of Freedom of Thought, Conscience and Religion in ASEAN.” As in the event in Bandung held earlier in the week, the resource persons and participants focused on the role of the state in protecting freedom of religion and belief. The event was opened by the Acting Executive Director of HRRC, Prof. Dr. Harkristuti Harkrisnowo, S.H.MA., and the Dean of the Law Faculty of University of Indonesia, Prof. Topo Santoso, S.H., M.H., Ph.D.

Sharing the main findings of “Keeping The Faith” on the general trend of freedom of region and belief in ASEAN, Ms. Faith Delos Reyes, HRRC Research and Project Coordinator, highlighted the important role of civil society in supporting the state in maintaining religious harmony. She cited as examples grassroots activities like the Panzagar movement to halt hate speech in Myanmar and religious organisations such as the Muhammadiyah and Nahdhatul Ulama in Indonesia that endorse moderate religious views and recognize equal rights of religious minorities. She however also emphasized the importance of good governance, rule of law, and the state’s involvement as a neutral mediator in inter-belief dialogue. 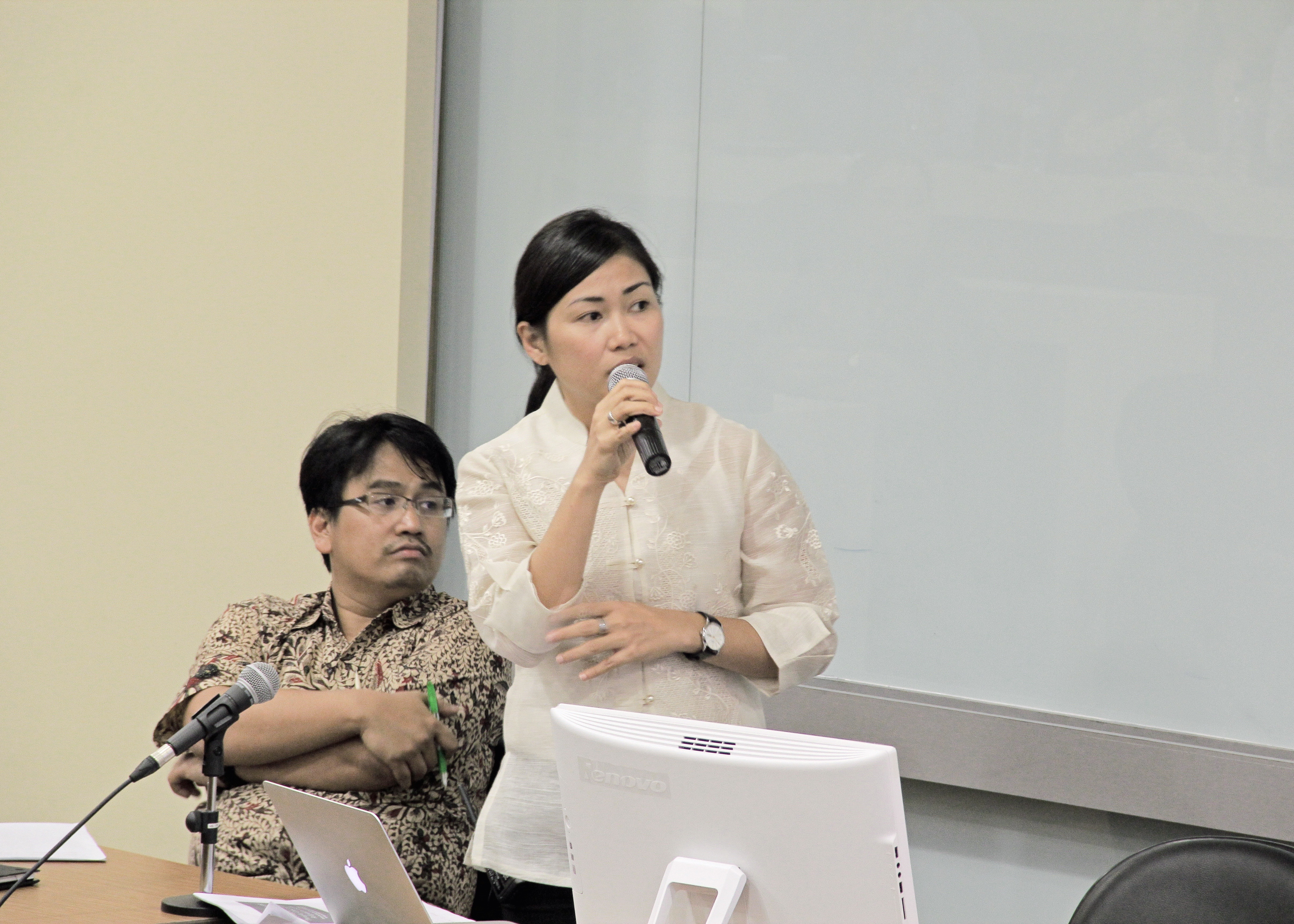 Focusing on the ASEAN Human Rights Declaration, Ms. Delos Reyes said that ”While not a perfect document, the Declaration is a political statement that shows the willingness of Member States to improve human rights, including freedom of religion and belief. ASEAN as a region is interlinked, and this has become increasingly clear with calls from across the region to address the situation of the Rohingyas. Human rights problems of one country do impact neighbouring ones, and we should engage with the Member States and urge them to realise the commitments expressed in the Declaration as well as in other international instruments they are Parties to.”

Dr. Zainal Abidin Bagir, Director of the Center for Religious and Cross Cultural Studies (CRCS) at Gadjah Mada University and author of the Indonesia country report in “Keeping the Faith,” focused on the country’s freedom of religion situation. “Law both shapes the society and is shaped by the society. Thus, engagement with the society is important to end discrimination and persecution against religious and belief minorities.” Specifically on the Law on Anti-Blasphemy in Indonesia, “there is a need to raise awareness in the society to repeal laws that open the room or pathway toward intolerance,” Dr. Bagir emphasized.

The Coordinator of AWC UI, Mr. Ahmad Suaedy, agreed with Dr. Bagir that the matter of protection of freedom of religion is not only about enactment and enforcement of laws. He emphasized the need for non-politicized forums for religious harmony as well as strong political will that is expressed by ensuring there is protection for law enforcers who resist communal pressure to discriminate and persecute minorities. “Problems related to religion and belief cannot be solved only by religious leaders,” he emphasized, “they have to be discussed and solved by involving other actors such as government agencies, law practitioners, city experts, and urban planners.”

Echoing this stance, the Chairperson of SENTRA HAM, Dr. Hadi Purnama, quoted Roscoe Pound and said that “Law is a tool of social engineering.” There is a need for a legal system that is built by involving relevant actors, which provides consistent protection to minorities from the highest to the lowest legal instrument. He called upon the Ministry of Law and Human Rights to take a more active role in ensuring quality and consistency of legal instruments relating to freedom of religion in Indonesia.

“Keeping the Faith” was produced with the support of the Norwegian Embassy in Jakarta. The HRRC also receives support from the WSD HANDA Center for Human Rights and International Justice, the East West Center, and the University of Indonesia. The roadshow kicked off during the ASEAN People’s Forum in April in Kuala Lumpur. The next roadshows will take place on 30 May at Gadjah Mada University in Yogyakarta and June 29 in Manila. If you are interested to participate, please email us at info@hrrca.org.