Phnom Penh, 5 February 2016—The Human Rights Resource Centre (HRRC) and Paññāsāstra University of Cambodia (PUC), with the support of Canada Fund for Local Initiatives (CFLI), held a dissemination workshop for “Keeping the Faith: A Study of Freedom of Thought, Conscience, and Religion in ASEAN.” The event, held at PUC Campus, was attended by around 350 university students as well as representatives of various civil society organizations and government agencies. The event focused on understanding the dynamics of freedom of religion in Cambodia and ASEAN.

In the opening session, Dr. Kol Pheng, Founder and President of PUC, gave a speech that emphasized the importance of the topic to be discussed in the workshop. He noted that “Education is important in protecting the youth from extreme beliefs.” Subsequently, in her opening remarks HRRC’s Acting Executive Director Professor Harkristuti Harkrisnowo reminded the audience that the ASEAN leaders are committed to realize an “inclusive community with a strong sense of togetherness and common identity,” and violent extremism is a threat to this mission. Keeping The Faith, Ms. Harkrisnowo asserted, is HRRC’s contribution to eradicating intolerance, discrimination, and incitement of hatred based on religion and belief, through providing a general picture as to how far or near the ASEAN member states are in achieving full respect for freedom of religion and belief. 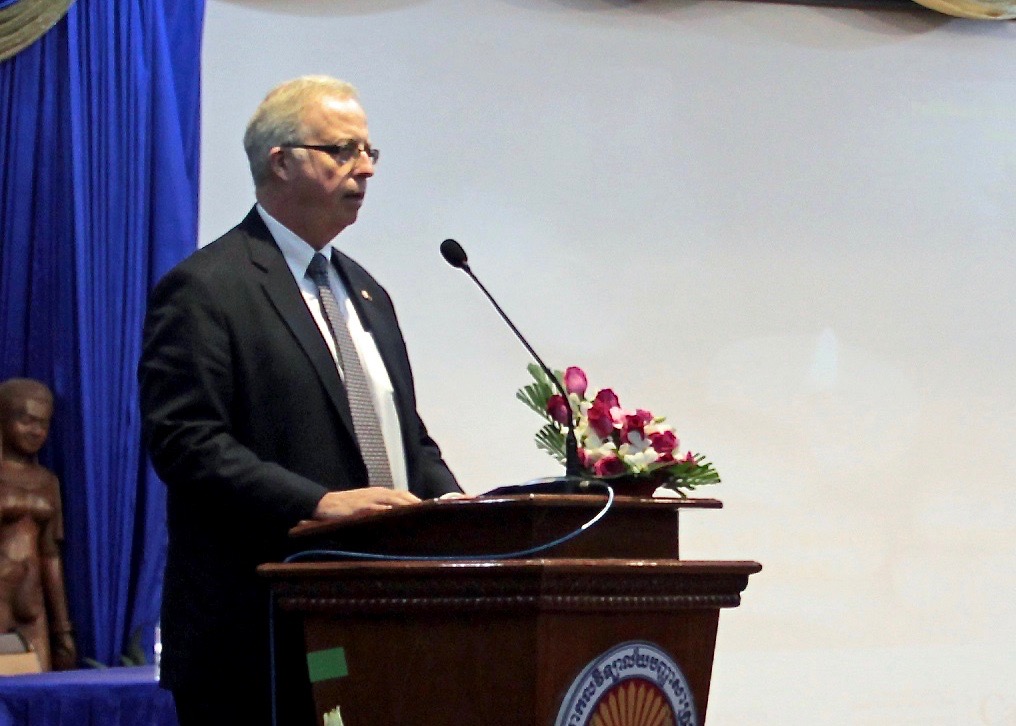 Presenting the last opening remarks, H.E. Philip Calvert, the Ambassador of Canada to the Kingdom of Thailand, the Kingdom of Cambodia, and the Lao People’s Democratic Republic, commended the organizers for organizing the workshop. “We see daily evidence of the continued strength, and even growth, of religious intolerance and discrimination,” he lamented. He further emphasized that “Discrimination against religious and ethnic minorities is not only morally wrong, it is ultimately destabilizing to society.” He referred to the fact that countries that can end practices of intolerance end up more peaceful, secure, and stable. He further urged ASEAN to find the balance between its long held principle of non-interference and the need to respect human rights.

Facilitated by Prof. Taing Ratana from PUC’s Law Department, the subsequent session saw presentations on Keeping The Faith’s synthesis report by Ms. Faith Delos Reyes, HRRC’s Research and Project Coordinator; the Thailand Country Report by the author Mr. Khemthong Tonsakulrungruang; and the Cambodia Country Report by Professor Kong Phallack, the author of the report as well as the Dean of PUC’s Department of Law and Public Affairs. H.E. Sin Sovanni, Advisor to Cambodia’s Ministry of Cult and Religion, also gave a presentation on the government’s effort to maintain religious harmony.

Ms. Delos Reyes described the trends pertaining freedom of religion and belief in ASEAN, placing emphasis on how in some ASEAN countries weak governance signified by the lack of rule of law exacerbates conflicts resulting from religious intolerance. Mr. Tonsakulrungruang in his presentation highlighted the growing trend towards religious extremism in Thailand, something that should be kept in check for the sake of the country’s peace. Presently however, he maintained that the Thai government largely provides freedom to express any religion and belief, with registration of religious organizations being conducted only for the purpose of receiving fund support from the government. He however noted that the conflict in Southern Thailand remains to be an issue, a complex one that would require society to overcome historical resentment, cultural ignorance, economic inequality, lack of armed forces’ accountability and unstable politics. Both Professor Kong Phallack and H.E. Sin Sovanni presented the situation in Cambodia, where freedom of religion and belief is specifically protected in Article 43 of the Constitution. They further emphasized that traditionally Cambodian society to a large extent is a tolerant one, which minimizes the chance for conflict.

The workshop saw a robust discussion session. Mr. Tonsakulrungruang in addressing a question on how to minimize the propensity for religious conflicts underlined the need to not deal in absolutes. He believes that an open society that celebrates rather than fears diversity can avoid conflict. Responding to the question on how to deal with religious groups that promote sedition, Ms. Delos Reyes commented how this is indeed a complex issue, where the right of the State to defend its sovereignty and territorial integration and the right to self-determination are at play. She noted that groups promoting sedition in the region are not simply seeking religious freedom, but are fighting for a fair share in economic wealth, a stronger political voice and cultural recognition—among other reasons. It is thus important for these underlying causes to be recognized and for parties to discuss how they can be peacefully addressed.

This event also served as a dissemination event for the Khmer translation of Keeping the Faith’s synthesis and Cambodian country report. The translation of these two reports is also made possible by CFLI and the electronic copy is available via HRRC’s webpage.