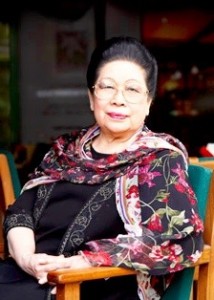 H.E. Dr. Saisuree Chutikul is Thailand’s Representative for Children’s Rights to the ASEAN Commission on the Promotion and Protection of the Rights of Women and Children (ACWC).

Dr. Chutikul was a member of UN CEDAW (2007-2010), Vice-Chair of the UN CRC (2001-2005) and represented Thailand for twelve years in the UN/CSW. She was a Cabinet Minister responsible for women’s affairs, children and youth and social development and a Senator, chairing the Senate Committee on Women, Children and Youth (1996-2000). She serves on various National Committees: Combatting Human Trafficking, Women’s Affairs, Children’s and Youth’s Affairs, as Vice-Chair on Early Childhood Development, and as Chair on the Law Reform in Compliance with the CRC. She is a member of the Board of Trustees for the UN Voluntary Trust Fund for Victims of Trafficking (UNODC).

Her past experience includes teaching psychology at Chulalongkorn University, Mahidol University, and Thammssat University. She later became the Dean of the Faculty of Education, Khon Kaen University. She served on many Board of Governors and Board of Directors to universities, research development institutes in Thailand and abroad and various NGOs. Dr. Saisuree was awarded with honorary doctorate degrees from four universities in Thailand and the USA. She received five national awards for distinguished contributions to Thailand in the areas of education, children rights, women’s rights, anti-trafficking initiatives and legal reform. She was also given the Global Women Leaders Award from VitalVoices, USA. She authored books for children of which one was given a National Award. She was one of the founders of Bangkok Symphony Orchestra and was the founder of the Thai Youth Orchestra.